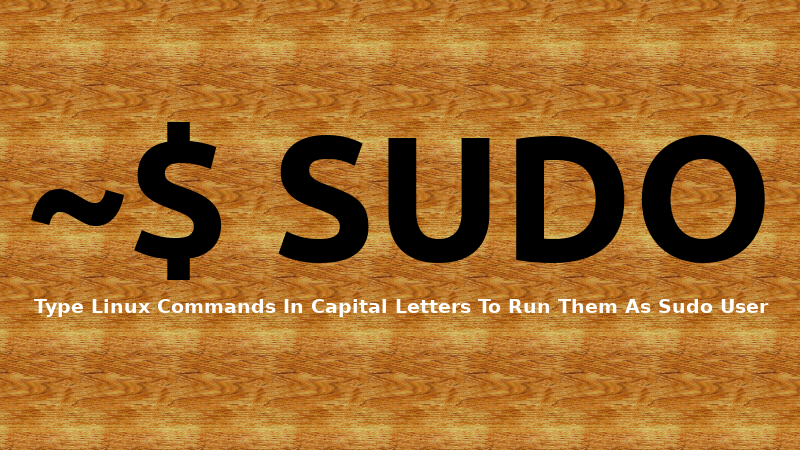 The reason I love Linux community a lot is they create so many FUN projects which you rarely find in any other propriety operating systems. A while ago, we looked at a fun project named “Hollywood” which turns the Terminal into a Hollywood technical melodrama hacker interface in Ubuntu-like systems. There are few other utilities available, for example cowsay, fortune, sl and toilet(!) etc., to kill your free time and keep you entertained! They may not be useful, but these utilities are really entertaining and fun to use. Today, I stumbled upon yet another similar utility named “SUDO”. As the name implies, whenever you type Linux commands in capital letters, the SUDO utility will run them as sudo user! Meaning, you need not to type “sudo” in-front of the Linux commands you about to run. Cool, yeah?

A word of caution:

Before installing this (or any utility), take a look at the source code (Link given at the end) and see if there are suspicious/malicious code included to harm your system. Test it in a VM. If you like or found it useful, you can use it in your personal/production systems.

This command will clone the contents of SUDO GIT repository and saves them in a directory named “SUDO” in your current working directory.

And, install it using command:

The command will add the following entries in your ~/.bashrc file:

It will also take a backup of your ~/.bashrc and save it as ~/.bashrc.old. You can restore it if anything goes catastrophically wrong.

Now, type Linux Commands in Capital letters to run them as Sudo user

Usually, we execute Linux commands that requires sudo/root privileges like below.

Right? Yes! The above command will create directory named “ostechnix” in root (/). Let us cancel this command using Ctrl+c.

Once SUDO is installed, you can type any Linux command in capital without sudo and run them. So, you can run the above command like below:

Please note that it will not bypass the sudo password. You still need to type sudo password to execute the given command. It will only help to avoid typing “sudo” in-front of each command.

Of course, typing “sudo” will take only a few seconds, so it is not a big deal. I must tell this is just fun and USELESS project to pass time. If you don’t like it, go away and learn something useful. If you like it, give it a go and have fun!