Tmate – Share Your Terminal Instantly To Anyone From Anywhere

There are many popular remote desktop sharing programs (such as Teamviewer, Guacamole, and TigerVNC etc.) you can use when you need to share your screen to your co-workers or friends. These programs will share your entire screen to others. But, if you want to share only the Terminal, you can just use Tmate. It is actually a fork of Tmux, a terminal multiplexer that lets you to use several programs in a single Terminal. They both can be installed on the same system at the same time. Tmate is something like a Teamviewer for your Terminal.

For those wondering, Tmate will establish a secure connection over SSH to tmate.io website and generate a random URL for each session. You can share the URL with someone you trust and they can use the Terminal as the way they use their own Terminal as long as the connection is active. It is best for collaborating on common projects, or debugging a project with a team of developers, or getting a technical support over remote network. Tmate supports all popular operating systems, including GNU/Linux, Mac OS X, and BSD systems.

In this tutorial, I will explain how to install and use Tmate in Unix-like operating systems.

For Arch Linux, and its derivatives like Antergos, Manjaro Linux, Tmate is available in AUR, so you can install it using AUR helper programs such as Yay.

For Fedora, run the following command to install Tmate.

On Ubuntu, and its derivatives like Linux Mint, you can install in using the following PPA.

On Ubuntu 18.04 LTS versions, enable the universe repository and install Tmate like below.

Before start using Tmate, we need to create a SSH key-pair. Because, the tmate program establishes a secure SSH connection with tmate.io using the local SSH key pair.

If you don’t create, you will see the following notification message at the bottom of the Terminal window.

Once you created the SSH key-pair, launch Tmate by running the following command from your Terminal:

If you entered a passphrase while creatingSSH keypair, you may need to enter it to establish the Tmate session.

After you started the Tmate session, share the connection ID with anybody you want to share your screen with. You can share it with any number of people you trust. They need not to be in the same network or need not to use the same OS. They don’t even have to have tmate or tmux installed. 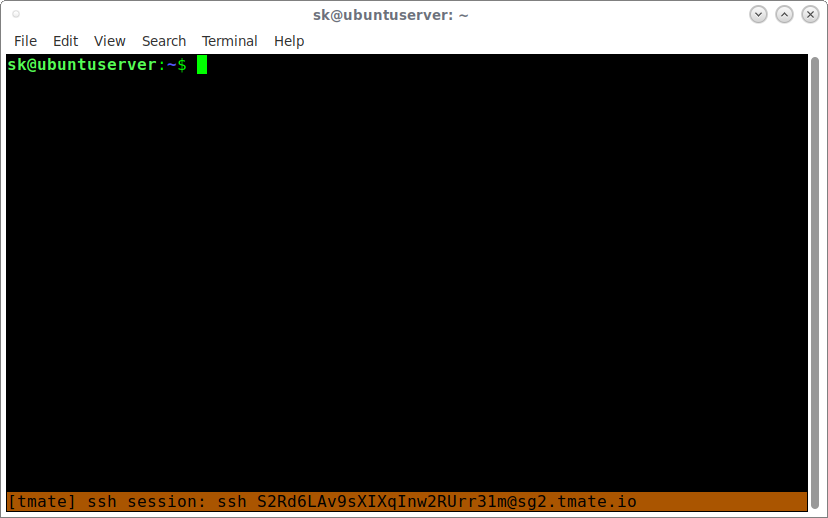 As you see in the above screenshot, there is a SSH session ID (a string of random characters) at the bottom of the screen. Just copy and share it with others to connect. Please note that this ID will disappear after a few seconds. However, you still can view the sessions IDs using command:

As you see in the above output, you can either share the Terminal via SSH session or a web session using the respective session IDs. You can also share either the read-only session or read-write session.

Very Very important note: Please be mindful that if you have given read-write session IDs (either SSH or Web), the user can do anything. Because, you just gave him your system access with sudo rights. So, I strongly suggest you to give read-only session IDs.

When you’re sharing the read-only session, you don’t want to let the remote users to view the other read-write session IDs. So, just clear the Terminal before giving the session IDs to the users.

For those who wants to share the Terminal via SSH sessions, give the SSH session ID to the remote users.

For example, the remote users to enter the following command to access read-only Tmate session from their system.

In the read-only session, the remote users only can view your Terminal. They can’t run any commands.

Now, the remote users can access your terminal with as read-write mode. That means they can run any command on your Terminal. All commands they enter in the remote session can also be viewed from your local Terminal.

For those who wants to share the Terminal via a web browser, just give the web URL to others to connect.

Say for example, to share the read-write, I would give this URL to my coworkers – https://tmate.io/t/LVWgMSX2wNhBLdrLfxtcX00rk

When they enter the above URL, they will see following screen. 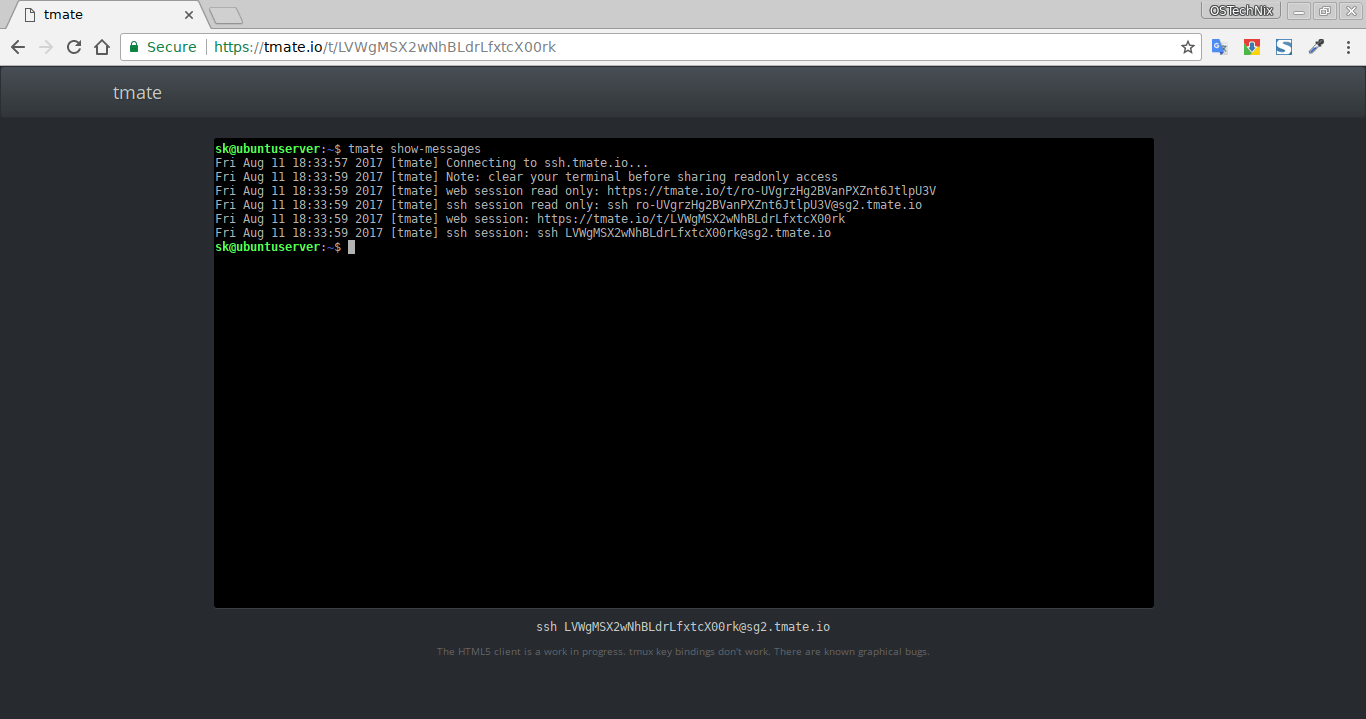 Working under a tmate session is exactly same as tmux. You can think of tmate as a reverse ssh tunnel accessible from anywhere. To exit from a session, type exit. For more details, refer the man pages.