The Difference Between more, less And most Commands

If you’re a newbie Linux user, you might be confused with these three command like utilities, namely more, less and most. No problem! In this brief guide, I will explain the differences between these three commands, with some examples in Linux. To be precise, they are more or less same with slight differences. All these commands comes preinstalled in most Linux distributions.

First, we will discuss about ‘more’ command.

The ‘more’ is an old and basic terminal pager or paging program that is used to open a given file for interactive reading. If the content of the file is too large to fit in one screen, it displays the contents page by page. You can scroll through the contents of the file by pressing ENTER or SPACE BAR keys.

A fellow Linux user has pointed out that more command do allow backward scrolling. The original version allowed only the forward scrolling. However, the newer implementations allows limited backward movement. To scroll backwards, just press b. The only limitation is that it doesn’t work for pipes (ls|more for example).

Open a file, for example ostechnix.txt, for interactive reading:

To search for a string, type the search query after the forward slash (/) like below:

To go to then next matching string, press ‘n’.

To open the file start at line number 10, simply type:

The above command show the contents of ostechnix.txt starting from 10th line.

If you want the ‘more’ utility to prompt you to continue reading file by pressing the space bar key, just use -d flag:

As you see in the above screenshot, the more command prompts you to press SPACE to continue.

To view the summary of all options and keybindings in the help section, press h.

The ‘less‘ command is also used to open a given file for interactive reading, allowing scrolling and search. If the content of the file is too large, it pages the output and so you can scroll page by page. It allows scrolling on both directions. Meaning – you can scroll up and down through a file.

So, feature-wise, ‘less’ has more advantages than ‘more’ command. Here are some notable advantages of ‘less’ command:

Press SPACE BAR or ENTER key to go down and press ‘b’ to go up.

To perform a forward search, type search query after the forward slash (/) like below:

To perform a backward search, type search query after the question mark (?) like below:

To open the currently opened file in an editor, press v. It will open your file in your default text editor. You can now edit, remove, rename the text in the file.

For more details about ‘less’ command, refer the man pages.

The ‘most’ terminal pager has more features than ‘more’ and ‘less’ programs. Unlike the previous utilities, the ‘most’ command can able to open more than one file at a time. You can easily switch between the opened files, edit the current file, jump to the Nth line in the opened file, split the current window in half, lock and scroll windows together and so on. By default, it won’t wrap the long lines, but truncates them and provides a left/right scrolling option. 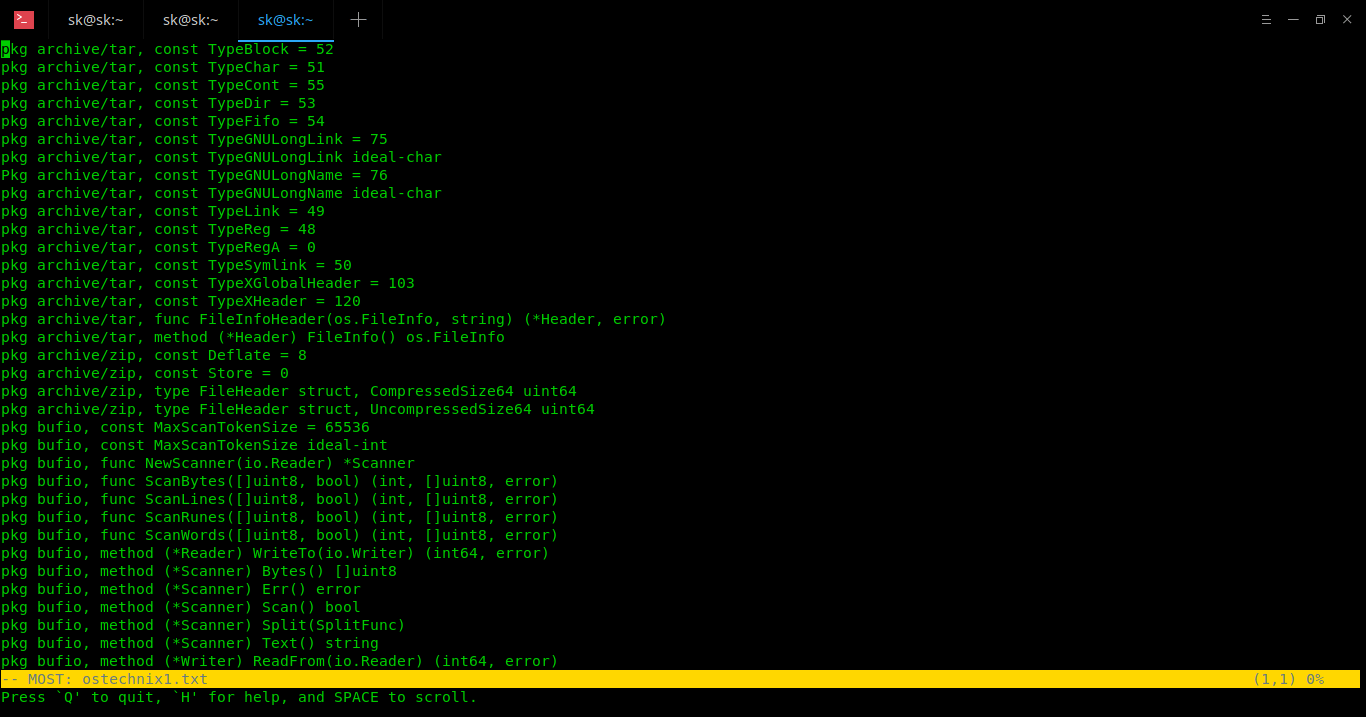 View a file using most command

To perform a forward search, press / or S or f and type the search query. Press n to find the next matching string in the current direction.

To perform a backward search, press ? and type the search query. Similarly, press n to find the next matching string in the current direction.

Open multiple files at once:

If you have opened multiple files, you can switch to next file by typing :n. Use UP/DOWN arrow keys to select next file and hit ENTER key to view the chosen file.

Switch between files using ‘most’ program

To open a file at the first occurrence of given string, for example linux:

To view the help section, press h at any time.

More details about ‘most’ command can be found in the man pages.

less – It has more features than ‘more’ utility. Allows both forward and backward navigation and search functionalities. It starts faster than text editors like vi when you open large text files.

most – It has all features of above two programs including additional features, like opening multiple files at a time, locking and scrolling all windows together, splitting the windows and more.

And, that’s all for now. Hope you got the basic idea about these three paging programs. I’ve covered only the basics. You can learn more advanced options and functionalities of these programs by looking into the respective program’s man pages.