How To Suspend A Process And Resume It Later In Linux

Let us say you run a program. But, you didn’t know how long it will take to finish. The process keeps running several minutes. You don’t want to wait that much longer. Because, some other important programs are waiting in the queue. Have you ever been in a situation like this? No worries! I just found a simple trick to suspend a process and resume it later. What I am going to do is just pause the currently running process, do some other important tasks, and then resume the stopped process after all other processes are completed. This can be very useful when you have less RAM or Processor to do multi-task. You can pause the running processes at any time, and resume them later, without having to start them all over again. Now let us go ahead and learn to suspend or pause a running process and resume it later in Unix-like operating systems.

Suspend A Process And Resume It Later In Linux

This is absolutely an easy! All you have to do is find the PID (Process ID) and using ps or ps aux command, and then pause it, finally resume it using kill command.

Let us see an example. I am going to download Ubuntu 18.04 netboot image using wget command:

Here, & symbol will move the running task (i.e wget) to the background without closing it.

Now, I want to pause this task and run other important tasks. To do so, first find the running processes using command:

As you see, the PID of wget command is 16143. Let us stop this process now. To do so, run the following command from your Terminal:

Verify whether the process has been stopped or not using command:

See? The wget process has been stopped.

Go ahead and do other important tasks. Once all tasks are completed, resume the stopped process using command:

To verify it if the process is running, run ps command. 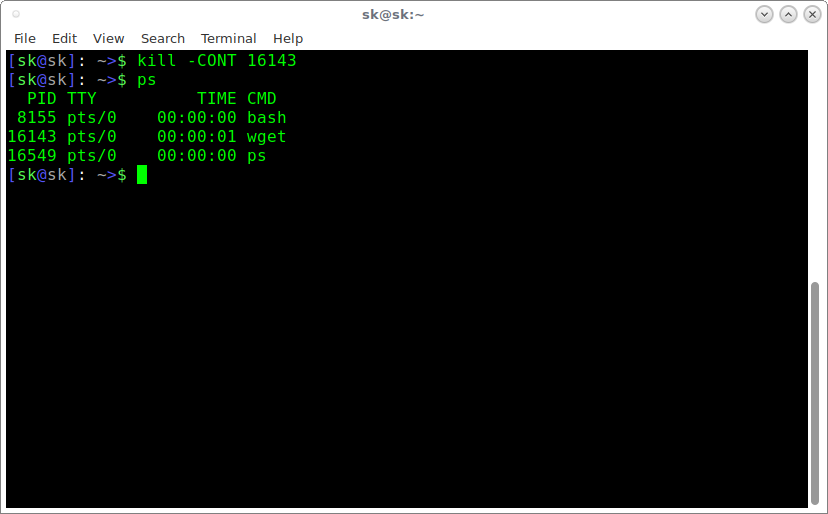 Suspend A Process And Resume It Later In Linux

See? The process which we stopped earlier has been resumed!

Like I said already, this will be helpful if you can’t do multi-task in system that has low RAM or CPU speed.

First, find the pid of the running process using ps command. Then, pause it using kill -STOP <PID>, and then hibernate your system. Resume your system and resume the stopped process using command kill -CONT <PID>.

Does this work after restarting my system?

You might wonder, will this also work after a full system shutdown or reboot? NO. Because, the PIDs of the processes will automatically change after rebooting your system. They do not persist across reboot. In such cases, you can suspend or hibernate your entire system, and resume them when you are ready.

And, that’s all. You know now how to pause and resume a process in Unix-like operating systems.