If you have worked on good-old MS-DOS, you might have used or at least heard about DF-EDIT. The DF-EDIT, stands for Directory File Editor, is a DOS file manager, originally written by Larry Kroeker for MS-DOS and PC-DOS systems. It is used to display the contents of a given directory or file DOS systems. Today, I stumbled upon a similar utility named DF-SHOW (Directory File Show), a terminal file manager for Unix-like operating systems. It is an Unix rewrite of obscure DF-EDIT file manager and is based on DF-EDIT 2.3d release from 1986. DF-SHOW is completely free, open source and released under GPLv3.

DF-SHOW can be able to,

How To Use DF-SHOW Terminal File Manager

The “show” program (similar to the ls command) is used to display the contents of a directory, create new directories, rename, delete files/folders, update permissions, search files and so on.

To view the list of contents in a directory, use the following command:

Here, dfshow is a directory. If you invoke the “show” command without specifying a directory path, it will display the contents of current directory.

As you can see, DF-SHOW interface is self-explanatory.

On the top bar, you see the list of available options such as Copy, Delete, Edit, Modify etc.

In each option, one letter has been capitalized and marked as bold. Just press the capitalized letter to perform the respective operation. For example, to rename a file, just press R and type the new name and hit ENTER to rename the selected item.

To display all options or cancel an operation, just press ESC key.

Also, you will see a bunch of function keys at the bottom of DF-SHOW interface to navigate through the contents of a directory.

Press h to learn more details about show command and its options.

The “sf” (show files) is used to display the contents of a file. 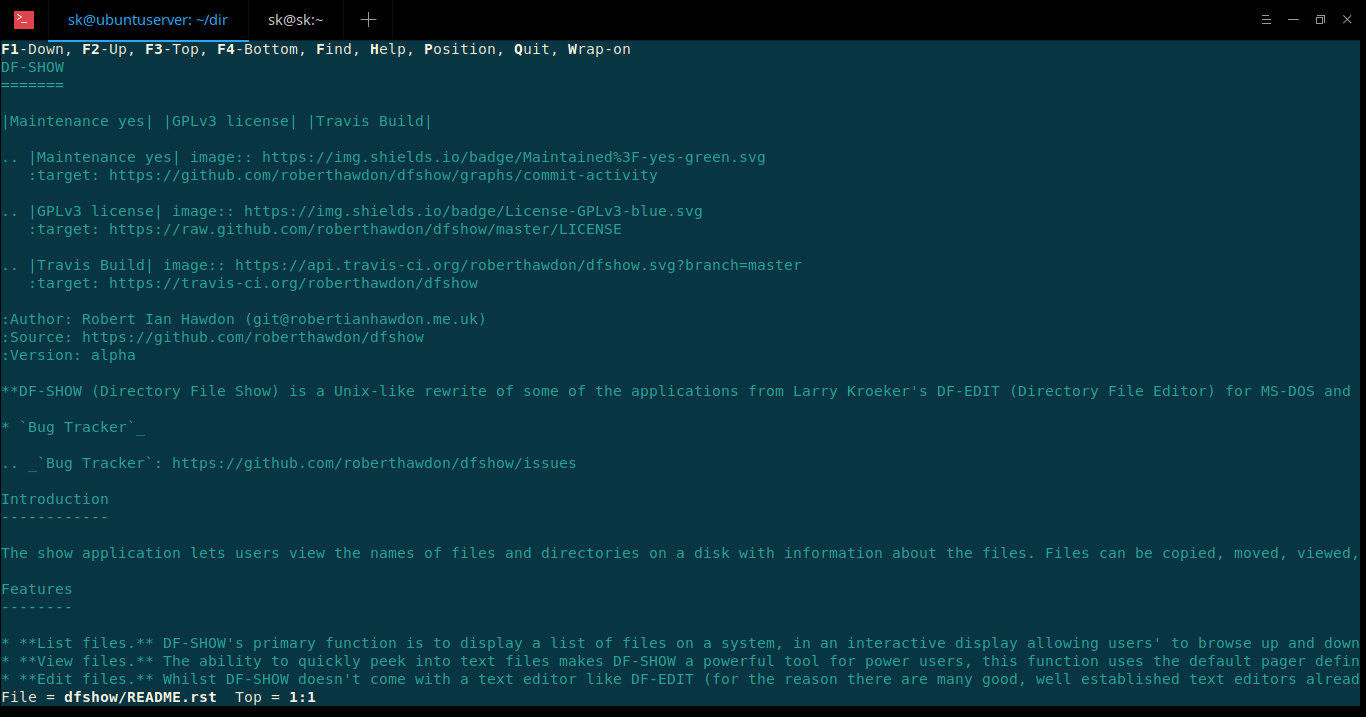 Want to give it a try? Great! Go ahead and install DF-SHOW on your Linux system as described below.

DF-SHOW is available in AUR, so you can install it on any Arch-based system using AUR programs such as Yay.

On Ubuntu and its derivatives:

On other Linux distributions, you can compile and build it from the source as shown below.

As Robert Ian Hawdon mentioned in the comment section below, there is also a COPR project which provides binaries for RPM based distributions including Fedora and CentOS:

It’s also possible to build and run DF-SHOW on FreeBSD, macOS, and even Hurd when compiling from source.

The author of DF-SHOW project has only rewritten some of the applications of DF-EDIT utility. Since the source code is freely available on GitHub, you can add more features, improve the code and submit or fix the bugs (if there are any). It is still in alpha stage, but fully functional.

Have you tried it already? If so, how’d it go? Tell us your experience in the comments section below.