The previous part of the Blockchain 2.0 series explored the the state of Smart contracts now. This post intends to throw some light on the different types of blockchains that can be created. Each of these are used for vastly different applications and depending on the use cases, the protocol followed by each of these differ. Now let us go ahead and learn about Public vs Private blockchain comparison with Open source and proprietary technology.

The fundamental three-layer structure of a blockchain based distributed ledger as we know is as follows:

The differences between the types mentioned here is attributable primarily to the protocol that rests on the underlying blockchain. The protocol dictates rules for the participants and the behavior of the blockchain in response to the said participation.

Remember to keep the following things in mind while reading through this article:

Most blockchains are either public or private. Broadly speaking, public blockchains can be considered as being the equivalent of open source software and most private blockchains can be seen as proprietary platforms deriving from the public ones. The figure below should make the basic difference obvious to most of you. 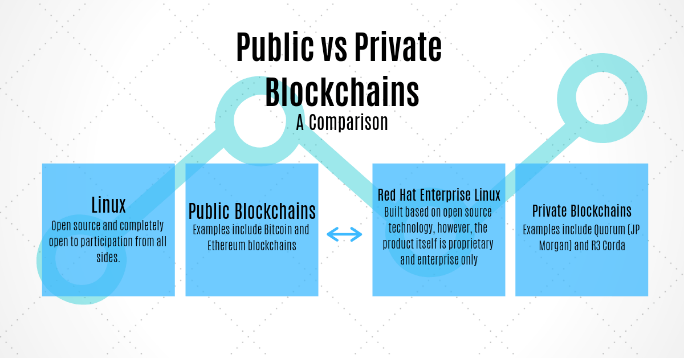 This is not to say that all private blockchains are derived from open public ones. The most popular ones however usually are though.

A public blockchain can be considered as a permission-less platform or network. Anyone with the knowhow and computing resources can participate in it. This will have the following implications:

In contrast, a private blockchain is a permissioned blockchain. Meaning:

Private blockchains usually don’t feature any of these in their protocol. This makes the system only as secure as most cloud-based database systems currently in use.

A note for the wise

An important point to note is this, the fact that they’re named public or private (or open or closed) has nothing to do with the underlying code base. The code or the literal foundations on which the platforms are based on may or may not be publicly available and or developed in either of these cases. R3 is a DLT (Distributed Ledger Technology) company that leads a public consortium of over 200 multinational institutions. Their aim is to further development of blockchain and related distributed ledger technology in the domain of finance and commerce. Corda is the product of this joint effort. R3 defines corda as a blockchain platform that is built specially for businesses. The codebase for the same is open source and developers all over the world are encouraged to contribute to the project. However, given its business facing nature and the needs it is meant to address, corda would be categorized as a permissioned closed blockchain platform. Meaning businesses can choose the participants of the network once it is deployed and choose the kind of information these participants can access through the use of natively available smart contract tools.

While it is a reality that public platforms like Bitcoin and Ethereum are responsible for the widespread awareness and development going on in the space, it can still be argued that private blockchains designed for specific use cases in enterprise or business settings is what will lead monetary investments in the short run. These are the platforms most of us will see implemented the near future in practical ways.

Read the next guide about Hyperledger project in this series.

We are working on many interesting topics on Blockchain technology. Stay tuned!