This brief guide explains how to rename files without typing full name twice in Linux operating systems.  As we all already know, we use mv command to rename files in Linux. To rename a file, the command would be:

Let me show you an example.

How To Rename Files Without Typing Full Name Twice In Linux

Edit your ~/.bashrc file with your favorite editor:

Add the following lines at the end: 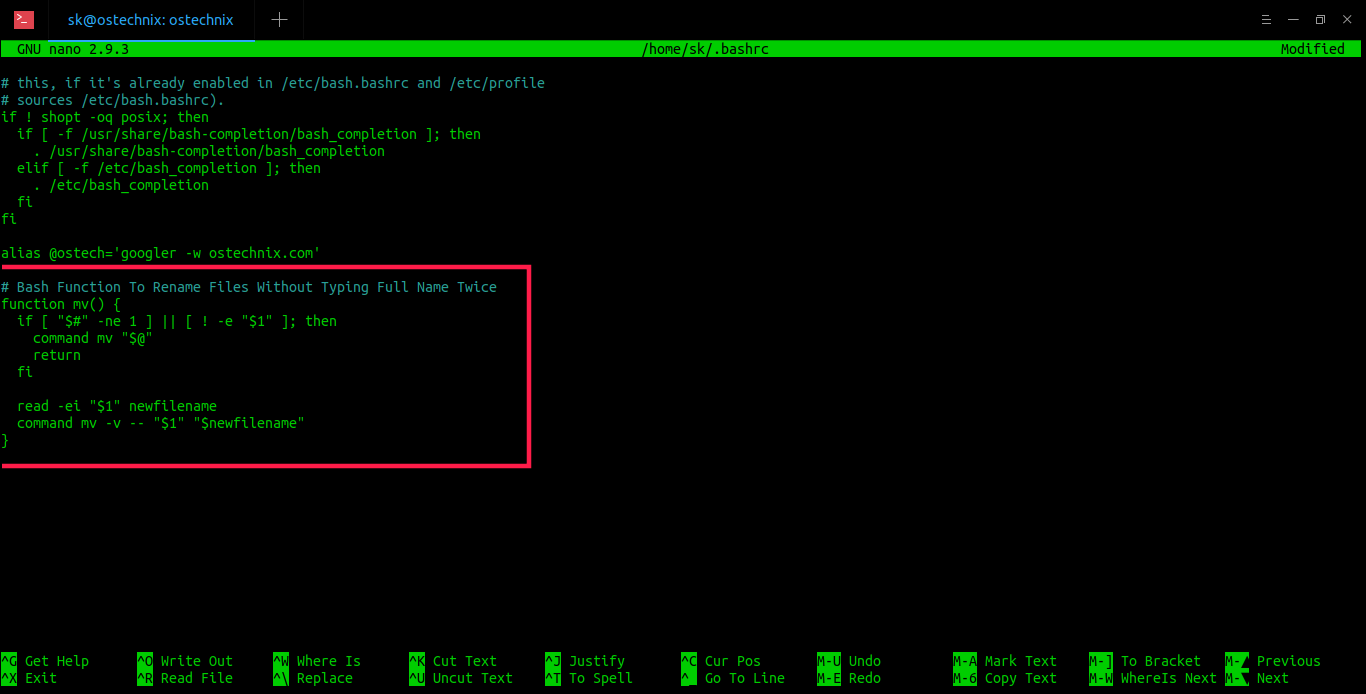 Here, the bash function name is mv. You can choose any other different name of your liking. Save and close the file. And then run the following command to take effect the changes:

From now on, you can only specify the original file name and rename the file as shown below.

This will display the file name in the Terminal. Edit the file name and hit ENTER key to rename it. Have a look at the following visual demo.

As you see in the above output, I have renamed the file ostechnix1.txt to ostechnix2.doc. Quite handy, right?

Use to arrow keys to move thorough the letters or hit the backspace key to remove all letters and type a new name for the file. Not just file name, you can rename the file extension as well. This is literally like hitting the F2 key and rename the file in GUI.

Other ways To Rename Files Without Typing Full Name Twice

There are also a few other ways to rename a file without having to type full name two times.

Apart from the BASH function method, here is another wimple way rename files with mv command. We don’t even need a BASH function. Use the following one-liner command to quickly rename the file:

The above command would copy the file named ostechnix1.txt to ostechnix2.txt.

If you don’t want to rename, but want to have two copies of the same file, use cp command like below:

The above command will copy the contents of ostechnix1.txt to ostechnix2.txt. You should have now two files with same contents.

We can use readline keybindings to quickly rename a file. These keybindings comes with mainstream shells by default. The CTRL+w command will cut the last word from a command and the CTRL+y key will paste that word in Terminal.

As you see in the above output,

The renameutils is a set of programs that is designed to batch renaming files and directories faster and easier. Renameutils consists of an utility called “imv” among others. It allows you to interactively rename the file name.

To rename a file, do:

This will display the above filename in the Terminal. Edit the filename as you like and hit ENTER to rename it. To learn about other renaming methods, refer the following guide.