How To View CPU Temperature On Linux

This brief tutorial describes how to view CPU temperature on Linux using lm_sensors. The Lm_sensors, short for Linux-monitoring sensors,  is a free software that provides the necessary tools and drivers for monitoring CPU temperatures, voltage, humidity, and fans. It can also detect chassis intrusions. So, you can find out a defective hardware components, and replace it to avoid the system hanging or overheating issues.

Lm_sensors comes pre-installed with most modern Linux operating systems. If it is not installed already, you can install it as shown below.

On Arch Linux and its derivatives:

Once installed, run the following command to configure lm_sensors:

The sensors-detect is a stand-alone program for detecting installed hardware and recommending specific modules to load. The “safe” answers are the defaults, so just hit to ENTER the accept the default values. It won’t cause any problems. This will create the /etc/conf.d/lm_sensors configuration file which is used by lm_sensors.service to automatically load kernel modules on boot.

The sample output of the above command in my DELL Laptop:

Now, type the following command to view the CPU temperature information of your Linux box:

To display the temperatures in degrees Fahrenheit instead of Celsius, use -f option.

To monitor the CPU temperature in real time, you can use ‘watch’ command like below. 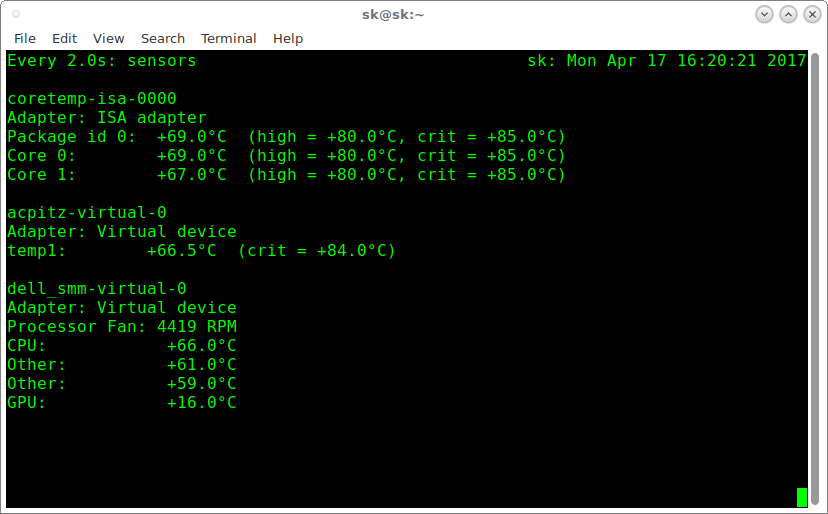 Press CTRL+C to stop the monitoring at any time.

And, that’s all. If you find this guide useful, please show your support by sharing it on your social and professional networks.