Howdy! I have a good news for non-native English speakers. Now, you can improve your English vocabulary and find the meaning of English words, right from your Terminal. Say hello to Pyvoc, a cross-platform, open source, command line dictionary and vocabulary building tool written in Python programming language. Using this tool, you can brush up some English words meanings, test or improve your vocabulary skill or simply use it as a CLI dictionary on Unix-like operating systems.

Since Pyvoc is written using Python language, you can install it using Pip3 package manager.

Once Pip is installed, run the following command to install Pyvoc.

Done! Let us go ahead and improve the English skills a little bit.

Let us say, you want to find the meaning of a word ‘digression’. To do so, run: 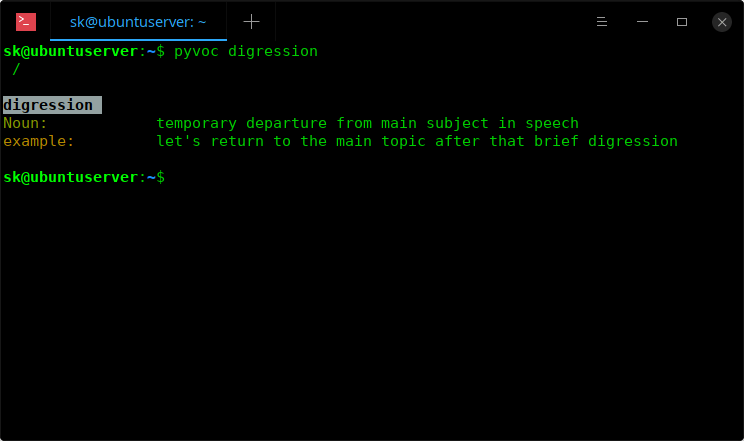 See? Pyvoc not only displays the meaning of word ‘digression’, but also an example sentence which shows how to use that word in practical.

Let us see an another example.

It also shows the word classes as well. As you already know, English has four major word classes:

Take a look at the following example.

As you see in the above output, the word ‘welcome’ can be used as a verb, noun, adjective and interjection. Pyvoc has given example for each class.

If you misspell a word, it will inform you to check the spelling of the given word.

A vocabulary group is nothing but a collection words added by the user. You can later revise or take quiz from these groups. 100 groups of 60 words are reserved for the user.

To add a word (E.g sporadic) to a group, just run:

As you can see, I didn’t provide any group number and pyvoc displayed the meaning of given word and automatically added that word to group number 51. If you don’t provide the group number, Pyvoc will incrementally add words to groups 51-100.

Pyvoc also allows you to specify a group number if you want to. You can specify a group from 1-50 using -g option. For example, I am going to add a word to Vocabulary group 20 using the following command.

See? The above command displays the meaning of ‘discrete’ word and adds it to the vocabulary group 20. If the group doesn’t exists, Pyvoc will create it and add the word.

By default, Pyvoc includes three predefined vocabulary groups (101, 102, and 103). These custom groups has 800 words of each. All words in these groups are taken from GRE and SAT preparation websites.

As I already said, you can use the Vocabulary groups to revise or take quiz from them.

For instance, to revise the group no. 101, use -r option like below.

You can now revise the meaning of all words in the Vocabulary group 101 in random order. Just hit ENTER to go through next questions. Once done, hit CTRL+C to exit. 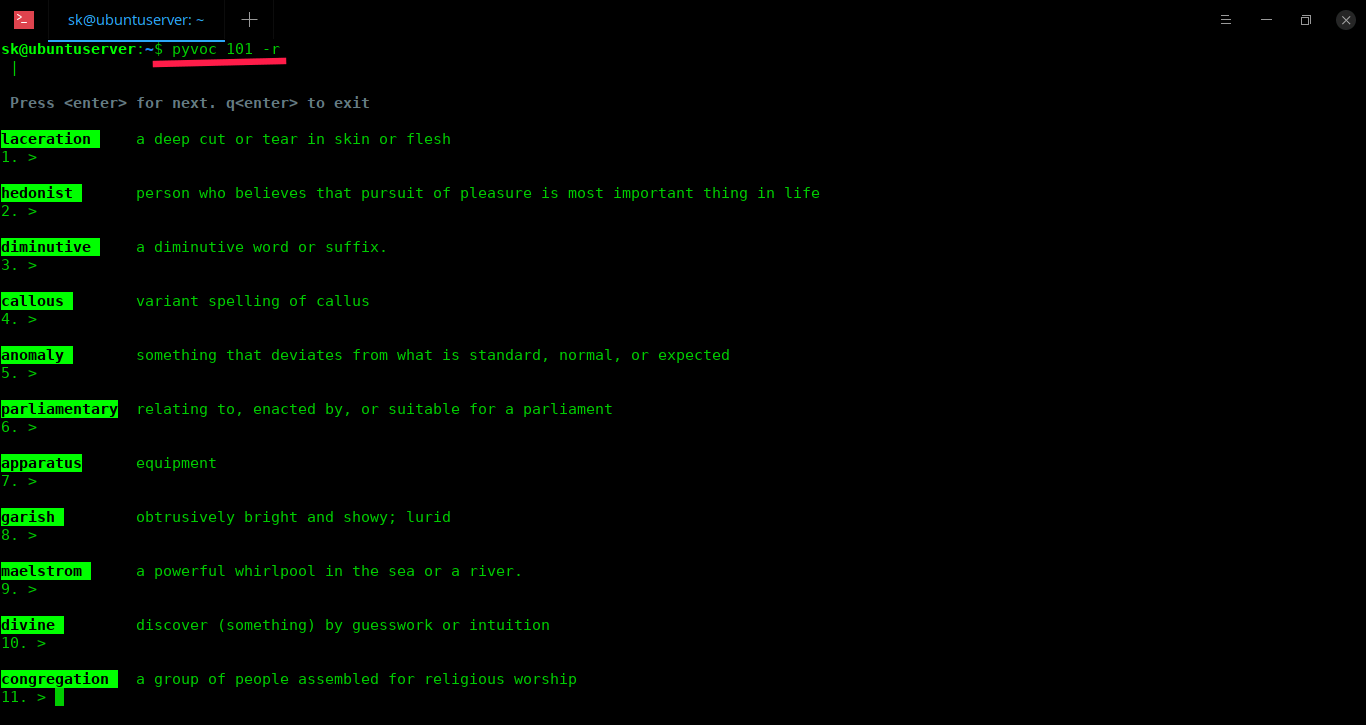 Also, you take quiz from the existing groups to brush up your vocabulary. To do so, use -q option like below.

This command allows you to take quiz of 50 questions from vocabulary group 103. Choose the correct answer from the list by entering the appropriate number. You will get 1 point for every correct answer. The more you score the more your vocabulary skill will be. 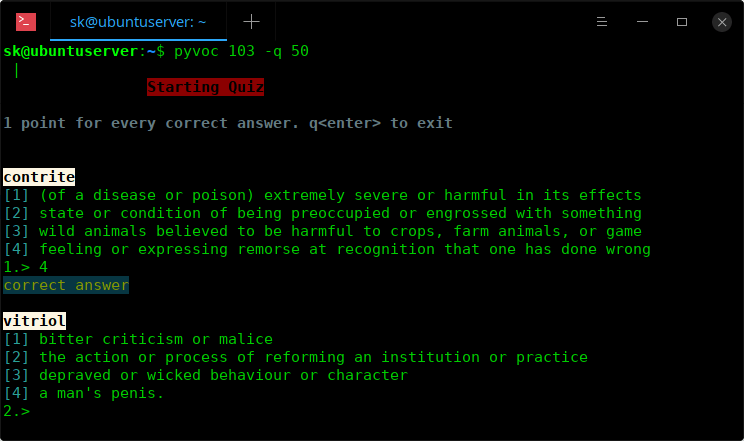 Pyvoc is in the early-development stage. I hope the developer will improve it and add more features in the days to come.

As a non-native English speaker, I personally find it useful to test and learn new word meanings in my leisure time. If you’re a heavy command line user and wanted to quickly check the meaning of a word, Pyvoc is the right tool. You can also test your English Vocabulary at your free time to memorize and improve your English language skill.