The other day I was testing a tool named OnionShare which is used to share files of any size securely and anonymously in Unix-like operating systems. While trying to install it in my Ubuntu test box, I encountered with an error – “E: dpkg was interrupted, you must manually run ‘sudo dpkg –configure -a’ to correct the problem”. As the APT package manager suggested, I ran “sudo dpkg –configure -a”, but still no luck. I got a new error message which I haven’t seen in the past. The error was: “dpkg: error: parsing file ‘/var/lib/dpkg/updates/0014’ near line 0: newline in field name ‘#padding'”. 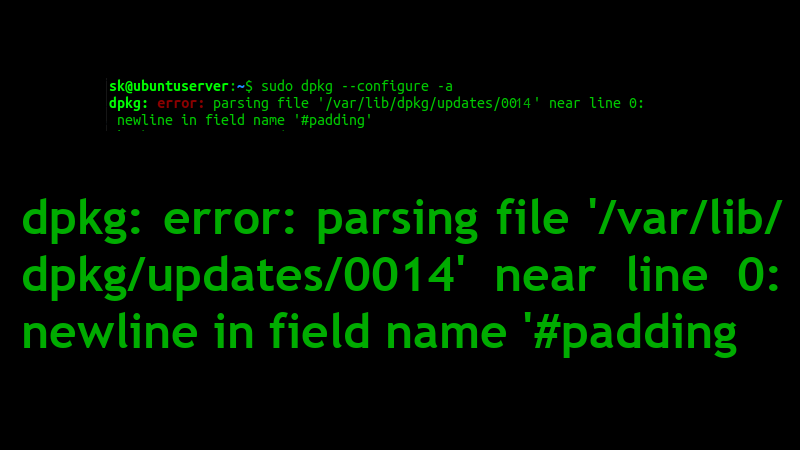 If you ever encountered with an error something like above, you’re in good hands. Follow the steps given below to fix it. I tested this in Ubuntu 18.04 LTS desktop and server editions. But, I suppose this solution may work in older Ubuntu versions and other Ubuntu derivatives like Linux Mint, Elementary OS etc.

To fix this error, just remove the problematic file i.e /var/lib/dpkg/updates/0014 in my case. Replace the file name with your own. And also, before deleting the file, make sure you have backup of the file.

Finally, run the following command to fix the error:

And, the problem is gone! I could be then able to install any software on my Ubuntu system.